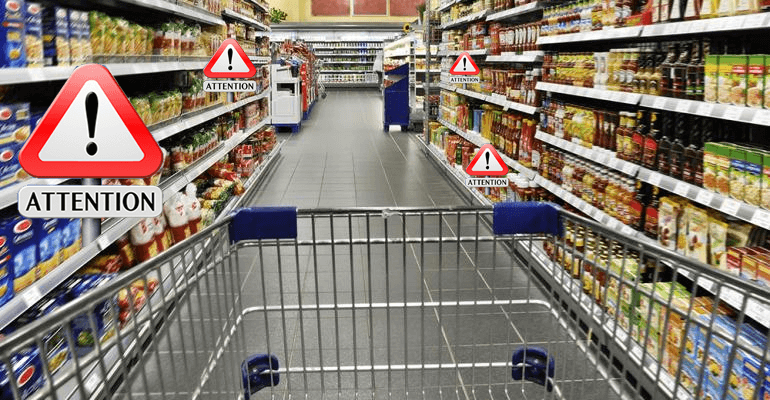 How to capture more shopper attention in today's cluttered stores

It has never been harder to stop shoppers in their tracks and seriously grab their attention. So here are a small selection of thought starters (I have many, many more) to help you understand what attention is.

Firstly, what is attention?

From a psychological perspective, why do we focus in on some stimuli while apparently ignoring others? Our ancestors needed to identify important stimuli very quickly. They needed to know whether that thing in the bushes was a likely mate, meal or dinner (fight, flight, find a mate). The brains of our ancestors developed so that they sub-consciously monitored the surrounding environment for critical fight, flight and find a mate stimuli. And we are still wired the same way today, even though we live in a very, very different world.

In other words, attention is so fundamental because it is what we have evolved to use to stay alive and make sure the human race as a species remains in existence on planet Earth.Here’s the first opportunity: We’re wired to notice stimuli that helped our ancestors survive. Even with stimuli that don’t pose any real threat to our survival nowadays. So if you want to capture the attention of shoppers and consumers, incorporate stimuli that posed a threat to human evolutionary survival. That puts Lion bars and Kellogg’s Frosties in a different light!

But the evolutionary threat needs to be big enough to be seen - Simply reproducing a pack front using a 25mm thumbnail image online is just not the right way to get attention, sorry.

This is a very persuasive generator of attention in-store and online. But we are only now learning how to make the most of it and what really works on shelf. For example, you may be interested to know that women are more likely to notice red stimuli. Why? Because they were the foragers. They needed to detect ripe red stimuli among other green plants, for example. Staying with colour, the way to generate more stand out on shelf in-store isn’t always to automatically choose red. It all depends on contrast. One red brick in a red wall would be practically invisible, but a single blue brick in a red wall would really stand out. If everything is equally vibrant, there’s no stand out. Nothing is able to grab attention. So before deciding on colours (and shapes) to use, study the environment in which they will be used.

I remember an impactful cereals display that really grabbed attention in the cereals aisle (one of the visually most colourful and vibrant aisles in-store). The display offered a free white bowl, a selection of which formed part of the display. So, in the area of many competing, shouting colours and lots of garish designs sat a small area of white circles – Instant stand out!

Motion is another sure-fire way to attract attention in-store and online. After all, pretty much all of the predators that threatened our ancestors moved. So we’re wired to be constantly on the lookout for movement. Even static images that show things moving attract attention. In one experiment, images of falling rocks received more attention than images in which the rocks had yet to start to fall.

You can also capture attention using simple biology: Images of people are social cues and once again, we’re hard-wired to pay attention to other people. Why? Because we evolved to thrive and survive in groups and so had to ‘rub along’ with one another in order to do so.

Faces activate specific brain regions. When researchers made small changes to an image and then measured if or when people noticed the changes, they found that people detected changes in faces more easily than in other objects.

Similarly, we have specialised areas of the brain that detect the human body. But we allocate most attention when both faces and bodies are present.

It wouldn’t be right for me to talk about attention without touching on the subject of human emotion. This is a topic dear to my heart and that I have actively studied and researched for more than 20 years. During this time I have accumulated a wealth of information on the subject.

According to general consensus, emotion captures attention. But some emotions capture more attention than others. Allow me to explain: Emotions each consist of 3 aspects: Enjoyment, Excitement and Intimidation (EEI). Emotions high in excitement capture more attention: Why? Because our instinctive responses to different forms of excitement can significantly impact on our chances of survival (or an ‘F’ from a fight, flight and find a mate perspective). And because of this, we have developed neural mechanisms to immediately detect arousing events.

Researchers have discovered that we also devote more sub-conscious attention to emotional words. When you read the following words: Traffic, Horse, Anger, Staircase, Garden, Road, Fear, your brain dwells more on ‘Anger’ and ‘Fear’. You can’t help it. Thanks to evolution, our brains constantly scan the environment, searching for threats, meals and mates. When it detects one such scenario, it triggers a set of automatic responses (now that’s real attention!). For example, if it detects a threat, it triggers a defence mechanism, even before conscious attention.

Returning to in-store attention, how do different products on shelf excite and arouse shoppers? And could they do more? Absolutely! But that would mean trying to explain evolutionary psychology to accountants to free up budget. Ah well, let’s just run a ‘3 for 2’ deal instead eh.

Consider this: Attention is correlated with choice. Research has clearly shown that shoppers are more likely to choose an option if they spend more time looking at it. So recognise that you not only have to grab attention, but you need to hold it too. In other words, first turn heads and then find ways to convert those head turns into meaningful engagement.

We have a simple rule of thumb that says: The front of the pack is for the shopper, the back for the consumer. In other words, everything on the front of pack should serve a purpose, capturing attention and then persuading the shopper to engage and then buy. A lot of other ‘stuff’ can be relegated to the back of the pack. Next time you look at just about any product packaging, take time to identify whether there is imagery and content in less than ideal locations. And just to reiterate, why oh why do brands and retailers think that 25mm thumbnail images of packs reproduced online is the right way to go?

In summary, when you want to attract attention, you need to recognise what shoppers are pre-disposed to pay attention to. And a lot of that comes down to evolution.

If you suspect that your products could do with receiving more attention in-store or online, let’s talk. If you have the brand, I have the science.