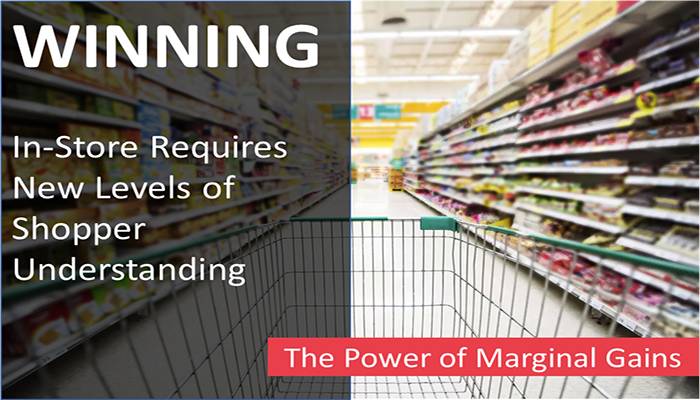 Make practical improvements, marginal gains, to make it better and easier for shoppers to buy your brand.

It’s time to go beyond looking at traditional performance metrics and take a fresh look at where and how you can make improvements through marginal gains.

The British Cycling Team, once upon a time, was in precisely the same position - stuck for where improve. But thanks to Sir Dave Brailsford and the theory of marginal gains, the team became better, much better.

"The whole principle came from the idea that if you broke down everything you could think of that goes into riding a bike, and then improved it by 1%, you will get a significant increase when you put them all together" Dave Brailsford (2012)

You can apply precisely the same thinking to brand and retail performance. It’s time to go beyond looking at traditional performance metrics such as share of market and year on year differences. A marginal gains based approach focuses on a more holistic strategy, embracing such aspects as shopper psychology and behavioural economics.

I have amassed a database of in excess of 1,490 specific psychological and behavioural insights relating to shopper and consumer behaviour. Let me share with you a brief example of just how easy it would be to improve your retail performance through the power of marginal gains.

In the world of cycling, any form of friction slows the bike down. The same can be said of retail; any friction along the shopper path to purchase will slow your sales down. Put yourself in the shoes of a shopper - go and buy your brand, all the while asking yourself these 3 questions:

1. Could it be easier to find?

2. Is the packaging as straightforward as possible?

3. Is there a clear reason why shoppers should opt for your brand over another?

Before you get too self-congratulatory, here are some common errors brands make.

78% of shoppers wear glasses (or contact lenses), but less than half of them wear their eye wear in the shops. So fundamentally, you have a significant percentage of shoppers who can’t read the information on pack - those key differentiating factors and reasons to buy.

Marginal gain no.1 - ensure you have got your on pack information hierarchy right and check if your key messages should be bigger in size.

At fixture, less than 46% of all shoppers pick up products to read anything more than the front of the pack. That means that if you have key information that isn’t on the front of pack, most shoppers won’t even consider it.

In supermarkets, shoppers are exposed to approximately 2 different promotional messages every second. Mentally, that's just overwhelming. Men, in particular, tend to walk away empty handed rather than risk buying the wrong product.

Marginal gain no.3 - communicate the prices of your products as ‘friction-free’ as possible (if you are on sale in a major supermarket, I strongly suspect not).

For the past 25 years, I have analysed shopper and consumer psychology across more than 20 countries. I have worked with leading retailers and brands to make their offering more shopper and consumer friendly. Quite simply, the easier it is for consumers to shop, the more they like the experience and the more loyal they become.

“We have created a consumer world that is at odds with how we have evolved as a species. As a result, shopping is harder than it should be. Consumers have become less loyal to brands. Most of us are grateful for all the ways our lives have been made easier. From running water, to the flush toilet and from jungle drums to the iPhone X.

It’s time to focus more on the process of buying things. Understand people’s deep, psychological needs in-store, browsing online or even queuing for a train ticket. Then go beyond customer service – Let’s focus on delivering genuine customer delight instead.

I have a database of 1,492 specific psychological and behavioural insights that you can tap into to make your brand truly delight the shopper and consumer.

The evidence suggests that retailers and brands who embrace delighting shoppers and consumers become the more preferred choice for more people more often. It really is a win, win opportunity.”